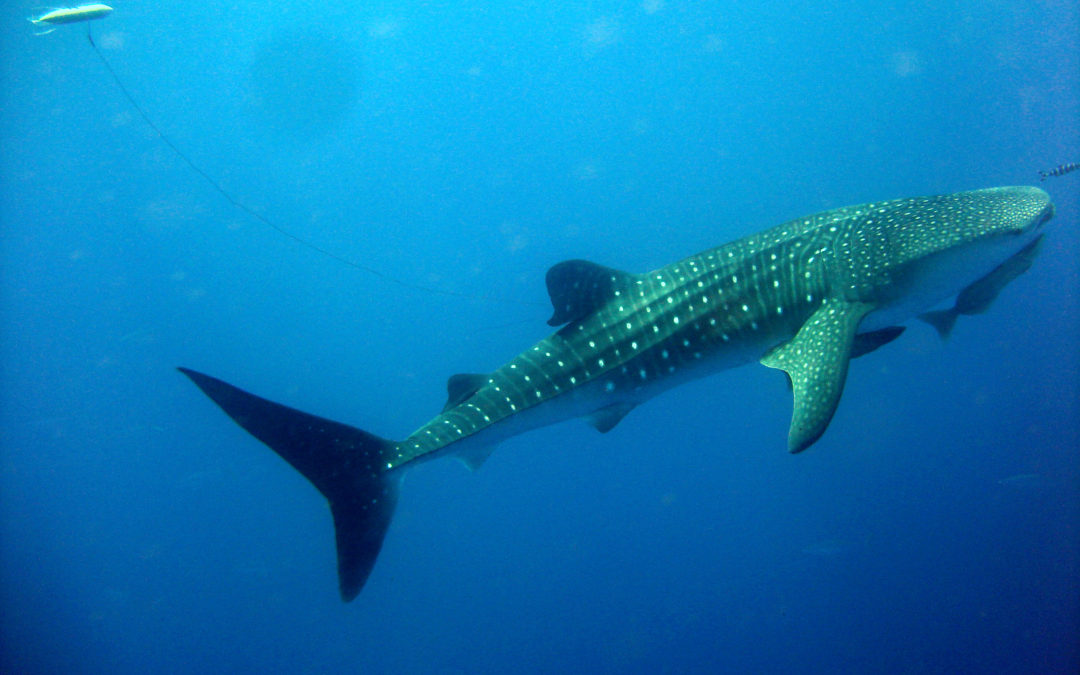 Sharks are portrayed in the popular imagination as true deadly machines — ruthless and unbeatable — but the reality is that they are being wiped out by an even more dangerous predator: man. Several species of the animal are at risk of extinction and this concrete threat is a topic that has been afflicting the world scientific community. In July, the cover of the traditional Nature magazine was featured in collaborative work in the area, carried out by a UFF researcher in conjunction with different universities in Brazil and the world.

In addition, the study was also highlighted in Forbes magazine and the North American news channel CNN. The researchers’ objective is to create tools to define shark conservation areas in the oceans, using satellite monitoring data. The research also proposes effective management of the seas, which contributes to the conservation of highly migratory species and seeks to defend them from a great danger: predatory fishing.

According to the post-doctorate in Marine Biology and Coastal Environments at UFF and a participant in the research, Fernanda de Oliveira Lana, the data collected seeks to draw a global map of shark movements, using a big data approach, combining information about the movement of sharks. pelagic species, which inhabit the open sea, and fishing fleets that move around the world and are tracked by satellites. About 24% of the marine space used by sharks is on the route of fishing vessels.

Some commercially valuable and internationally protected species have experienced significant losses in the number of animals, reaching 76% in some species. “Sharks play a key role in the oceans and in the food chain. They are the top of the chain and their reduction generates a shock in all marine life, as they are responsible for the balance of the ecosystem of the oceans,” emphasized the researcher.

The great message of this article is that, because it was carried out through collaborative science, it shows how powerful this type of cooperation is since it was written by more than 150 researchers and marine biologists of different nationalities — all in the same line, sending the same message.

The research, says Fernanda Lana, is the result of previous works that she carried out together with professor Fábio Hissa Vieira Hazin from the Federal Rural University of Pernambuco (UFRPE), on the occasion of her master’s and doctorate. The study, which according to the researcher is “immensely collaborative and global”, analyzed satellite monitoring data of different species of sharks. “This is a pioneering study to cover shark marking data in a broad way, globally mapping the movements of these animals,” says Fernanda. 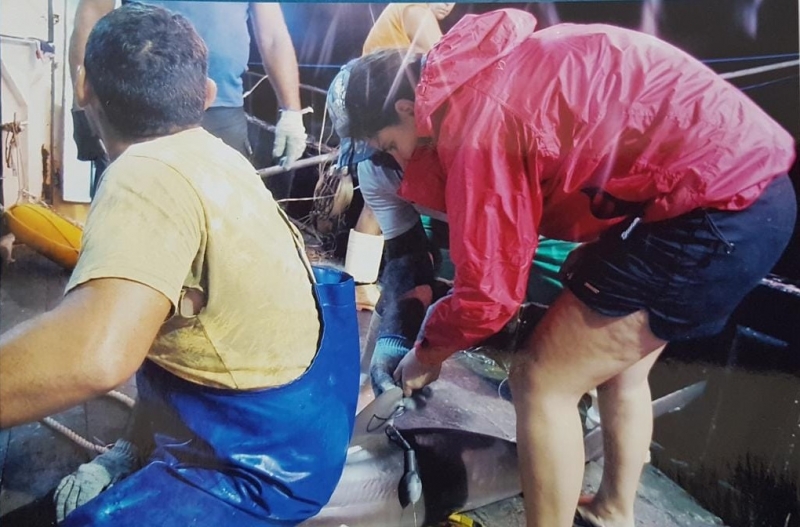 The article, according to the researcher, was composed by scholars from all over the world and some of the sharks’ markings, within Brazil, were made in the Arquipélago de São Pedro e São Paulo (ASPSP), about 1100km from the Brazilian coast (from Natal, RN) and 1800km (from Africa). The work contributed to expanding the knowledge of five species studied respectively by the team composed of researchers who worked with the professor at UFRPE Fábio Hazin, among which: the black-and-white shark, studied by Fernanda Lana (UFF); whale shark, by Bruno Macena (UFRPE); tiger shark, by André Afonso (UFRPE); hammerhead shark, by Natália Bezerra (UFPE); white-tip shark, by Mariana Tolott (UFPE), under the guidance of the UFRPE professor and co-author of the study, Paulo Travassos.

According to Fernanda Lana, most migratory sharks share the high seas with the global commercial fishing fleet, which uses longline, the fishing technique responsible for most of the incidental shark catches, which researchers call “bycatch”, and also voluntary. “In order to be able to quantify the fishing of these animals on a global scale, 1,804 shark markings were carried out in this study, covering 23 species, from 2002 to 2017, whose data were collected in 26 countries, which resulted in the elaboration of an important article on the impact of fishing in the sustainability of several species of sharks,” informs the biologist.

Through the results, the researchers concluded that about 1/4 of shark ‘habitats’ are located in active fishing zones, which emphatically threatens these animals, whose populations have been declining worldwide. The results show that fishing activities on the high seas are currently centered on sites of ecological relevance to sharks, data that help, for example, measures to delimit conservation areas, as well as quotas to reduce catches. The movement patterns of the marked animals indicated that several species were aggregated within the same main oceanographic characteristics.

“The great message of this article is that, because it was carried out through collaborative science, it shows how powerful this type of cooperation is since it was written by more than 150 researchers and marine biologists of different nationalities – all in the same line. , sending the same message. And what really stands out among the results is how small the refuge of these shark species is in the pelagic and oceanic environment, revealing that there is still a lot of work to be done,” emphasizes the biologist.

The researchers’ expectation is that such a unique data set will not be ignored and can be used to its greatest potential to influence the most effective protection for our migratory shark species, according to the biologist, and emphasizing that it is possible to do combinations of protection that bring benefits on all sides. From this study, it is evident that immediate conservation actions are needed to prevent further shark declines in the ocean.

When reporting on the work she has been developing with the United Nations (UN), Fernanda Lana had the opportunity, through the invitation she received from the Graduate Program in Marine Biology and Coastal Environments (PBMAC – UFF), of which she does leaves as Post-Doc Note 10 of Rio de Janeiro Research Foundation (Faperj), to act as a member of the Pool of Experts, a group of experts established by the UN General Assembly.

During this period, the researcher was nominated by the Federal Government as the national focal point. It is a post designated by the Ministries of Science, Technology, Innovation, and Communications (MCTIC) and Foreign Affairs (MRE). The nomination is aimed at implementing the work program for the 2017-2020 period and improving communication between the scientific community, the group, and other bodies and institutes involved.

Fernanda explains that the Regular Process for Global Reporting and Assessment of the State of the Marine Environment is a global mechanism established by the world summit on Sustainable Development in 2002, whose objective is to regularly review the environmental, economic, and social aspects of the oceans around the world, in addition to updating and forecasting new future actions.

“It is a contribution as a researcher and focal point before the United Nations General Assembly to strengthen the periodic scientific assessment of the marine environment, in order to improve the scientific basis for the formulation of public policies that will contribute to the maintenance and conservation of world ecosystems,” adds the biologist. 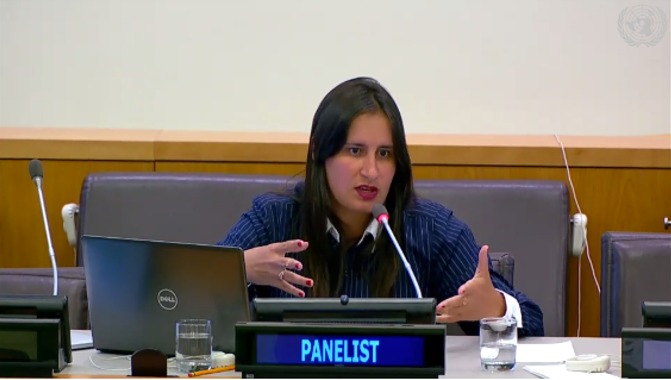 In January of this year, Fernanda was invited to present a work, representing Brazil and UFF, as a National Focal Point, at “The Multi-stakeholder dialogue and capacity-building partnership event”, at the UN General Assembly, at its headquarters in New York. On the occasion, she gave the lecture: “Sustainable fishing and data on climate change through regional priorities for international cooperation: past, present, and future”. At the event, with online transmission on the entity’s website, lectures were held with representatives of countries and global and regional intergovernmental organizations, as well as non-governmental organizations, including academics.

With this and her participation as a member of the Pool of Experts, the researcher represented Brazil and UFF with the UN in the area of the environment, and together with the group, she is preparing the UN book that includes the World Ocean Assessment. “My collaboration extends to several chapters in the book. They are based on the lines established by the 1st Integrated Global Marine Assessment, where regional priorities were identified. Several workshops were held in several countries, such as Palau, Malta, Ukraine, Indonesia, Ecuador, among others, to discuss and elaborate the chapters of this book,” she concludes.