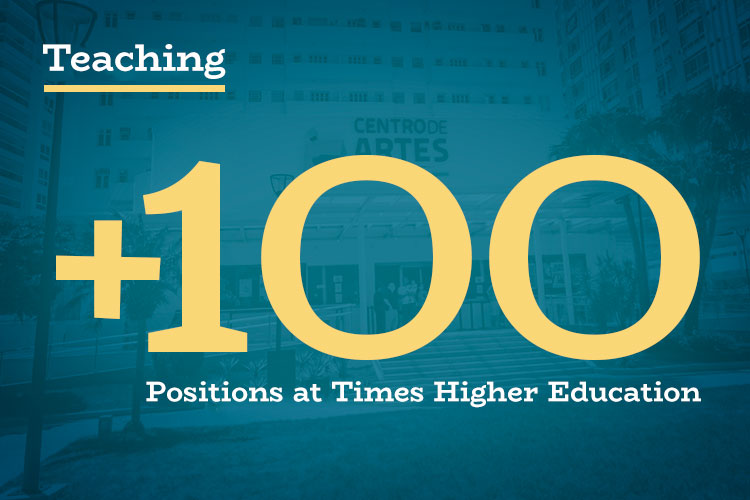 The result takes into account data from 2017 evaluated by Times Higher Education, a survey that considers a select group of leading higher education institutions in the world

The Universidade Federal Fluminense obtained a significant improvement in the factors of greater weight in the international university ranking prepared by Times Higher Education. Data from the recently published survey show progress in the areas of Teaching, Research, Citations, and Return to Industry. The result includes indexes analyzed for the year 2017 and reinforces the trend of academic improvement, despite the scenario of budget restrictions. Highlights for the evaluation of the quality of teaching at UFF, which rose 100 positions in the global ranking.

The Times Higher Education is an international university ranking that evaluates a select group of 1,396 institutions, among about 17 thousand, that fulfill the following criteria: offering undergraduate courses, having published at least one thousand relevant articles between 2014 and 2018, and at least 150 in each of those years, and not concentrate more than 80% of the research in a single area.

According to the President of UFF, Antonio Claudio Lucas da Nóbrega, the research comes at an important moment and highlights the quality of Brazilian public higher education. The number of Brazilian universities present in the ranking has increased, from 32 in 2018 to 36 in 2019, and to 46 in the 2020 edition. “Such expansion of the space of Brazilian institutions occurs despite budgetary difficulties. It is a result to be celebrated by the Brazilian higher education system, which has managed to honor its social responsibility, even in the midst of uncertainties and difficulties,” he says.

The comparison with results from Latin American universities shows that of the 101 ranked, 46 are Brazilian. Brazil is the country with the most indexed institutions, followed by Chile, with 18. Argentina has only 4 universities in the ranking.

As for UFF results, it is worth mentioning the rise of more than 100 positions in the Education category between THE 2019 (with data for 2016) and THE 2020 (with data for 2017). It is worth remembering that in this period the University was already facing budgetary difficulties, and even so, it rose in the international comparison. “This is due to a combination of improved university reputation, greater effectiveness and also greater efficiency in the use of resources — having been able to train more higher-level human resources with fewer resources,” explains the rector.

In the three most important factors in the ranking (Teaching, Research, and Citations), UFF presents better results in the recently released survey than in the two previous editions of the same ranking. In the analysis of metrics, Education went from 16.7 to 20; Research from 9.6 to 11.3; Citations from 11 to 14.8 and Return to Industry from 34.3 to 35.2.