UFF hosts the 20th Meeting of Presidents of Grupo Tordesillas 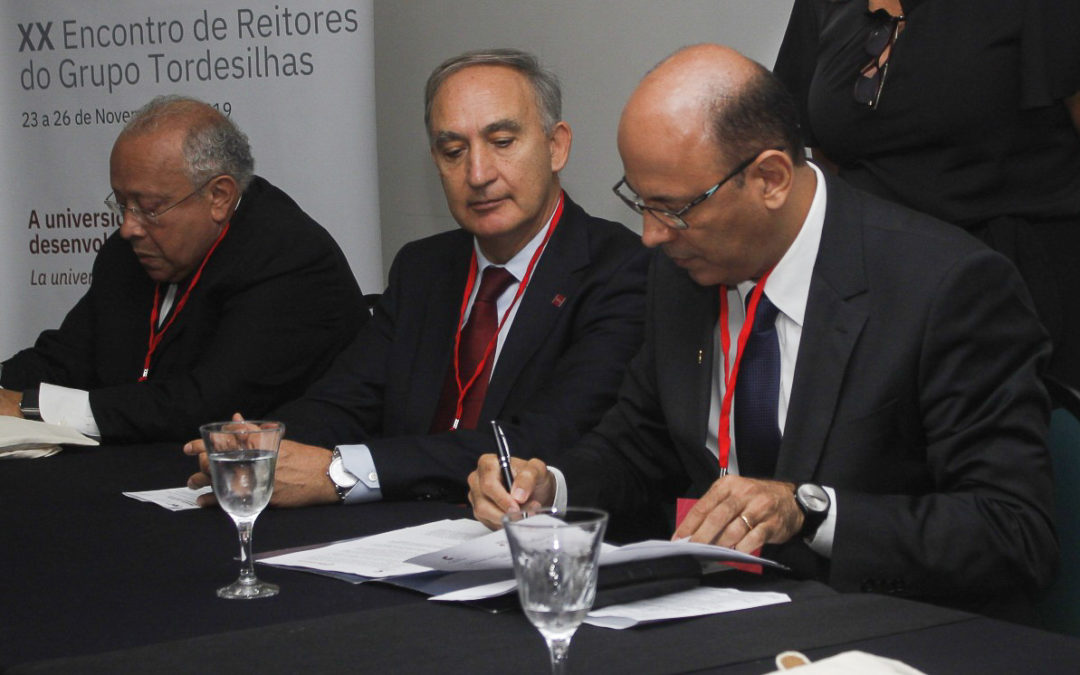 On the morning of November 25, Universidade Federal Fluminense hosted the Opening Table of the 20th Meeting of Presidents of Grupo Tordesillas. On the occasion, the vice-president of UFF, Professor Fabio Passos, signed the Agreement between the group and the Fundación Carolina. In addition, the Opening Conference took place: “The university and global development”, given by Luiz Davidovich, president of Academia Brasileira de Ciências; and the first debate table: “University, development and green economy”, moderated by Leonardo Guelman, superintendent of the UFF Arts Center.

According to professor Fabio Passos, the 20th Meeting reinforces the relevance of knowledge and universities. “The university extends throughout the history of society. It is important that we always remember this. We live in a situation in Brazil where we need to talk more and more about the relevance of the university and that it helps to develop society, the country, and the world. This has to be raised always. It is a moment of resistance against the devaluation of national universities.”

The president of Universidade do Porto, António Manuel de Sousa Pereira, highlighted the construction of multilateral projects for contemporary universities. “We have as a policy of the university not to want to take paths alone. We understand that today in our society, walking alone is walking nowhere. Therefore, we understand that making partnerships is fundamental and these partnerships are facilitated at the Spanish and Brazilian levels because there is an immense cultural heritage that we have to explore in an increasingly competitive world. I hope that this forum can stimulate existing cooperations and create new so that our community will be strengthened and be able to assert itself strongly in an increasingly challenging international context.”

The rector of Universidad de Valladolid, António Manuel de Sousa Pereira, praised the organization of the event and the reception of UFF. “It is a pleasure to be in Niterói participating in an already historic meeting of deans. In this way, I am grateful for the magnificent organization of UFF and the entire team of its president, particularly in the figure of Livia. I believe it is very important to be present at these meetings to share experiences and strengthen multilateral cooperations between universities in the three countries.”

In turn, the president of Universidade de Lisboa, António Manuel da Cruz Serra, told of the expectation of fostering new ideas and collaborative projects between Brazil, Spain, and Portugal. “We are increasing the interaction with Brazilian and Spanish universities present here. We have a lot to do, both in teaching and in research, with a lot of progress to increase ties, in some cases older, in others newer with all the institutions of the group.”

Organized by the International Cooperation Office, the event had, this Monday, the table “Women, agents of development and knowledge production”, mediated by the Vice-President of Research, Graduate Studies, and Innovation, Andrea Brito Latgé.

The meeting continues on Tuesday with an intense program with the participation of rectors, vice-rectors, professors, and researchers from the member institutions, addressing the theme: “Education and culture for social development”, mediated by the Vice-President of International Relations, Livia Reis; and the conference “Challenges and sustainability in universities today”, given by João Carlos Salles Pires da Silva, Dean of Universidade Federal da Bahia. The Doctoral Colleges will have targeted meetings, in the areas of Psychology, Environmental Sciences, Physics, Nursing, Engineering, Public Health, and History.

According to Luiz Pedro San Gil Jutuca, Brazilian coordinator of the Grupo Tordesillas, Doctoral Colleges are an important moment for the international exchange of ideas and scientific projects. “The Grupo Tordesillas meeting, which takes place annually, is always a moment where we can exchange experiences between universities in the three countries. This is very good because we are always predisposed to learn from good actions in other institutions. Doctoral colleges are research groups formed with participants from the three countries and show how important the group is.”

Professor Ana Abrahão, director of the UFF School of Nursing, explains that for ten years the School of Nursing has participated in the Programa de Enfermería del Grupo Tordesillas. According to the professor, being a member of the academic network allows the school to participate in specific calls for post-doctorates, cotutelles, technical visits, undergraduate internship, among others. “Partnerships are formed with member universities that extend from undergraduate to graduate courses, establishing academic and cultural ties between the members of these institutions. New collaborations are established at each meeting and we are advancing in the cooperation of scientific investigations that promote structures and networks in a research environment focused on nursing care,” she concludes.

The Grupo Tordesillas is an academic network that aggregates 26 Brazilian institutions, 20 Spanish and 9 Portuguese, currently totaling 55 higher education entities. Its main objective is to promote cooperation among its members in the areas of education, science, technology, and innovation.

The Vice-President of International Relations Livia Reis explains that, in the search for consolidation of its internationalization, UFF maintains bilateral agreements with most universities participating in Tordesillas. “This makes it possible for many undergraduate students to be sent to these institutions annually through international mobility,” she explains.

The group was born with the celebration of the 1st Meeting of Presidents of the Universities of Brazil, Spain, and Portugal, held in the year 2000 and was hosted by the Universidad de Valladolid. The first meeting was held in the Hispanic city known as Casa del Tratado, where the historic Treaty of Tordesillas was signed in 1494.