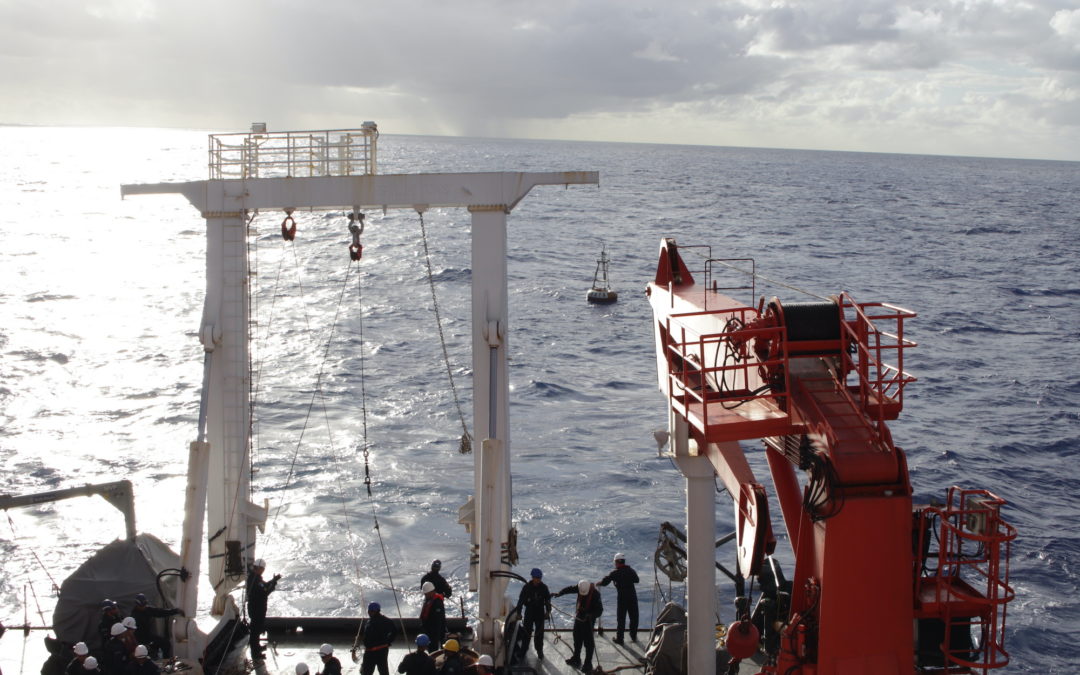 Little known by Brazilians, the Amazônia Azul — also known as Brazil’s Exclusive Economic Zone — is the maritime territory of Brazil, corresponding to an area of 4.5 million square kilometers, equivalent to more than half of the country’s continental area. Brazil exercises sovereignty over this region, which has enormous potential for resources, biodiversity, mineral, energy, and non-extractive resources. In order to explore its fertility, researchers from several universities in the country embarked on the Hydroceanographic Research Ship Vital de Oliveira on October 22, with projects ranging from the collection of samples for analysis of microplastics to marine biogeochemistry, meteorology, and oceanography, for example.

The Universidade Federal Fluminense (UFF) is represented on board by the project Dinâmica Meridional do Acoplamento Oceano-atmosfera no Atlântico Sul (Meridional Dynamics of Ocean-atmosphere Coupling in the South Atlantic – DiMAS), created in 2015 under the justification of investigating the coupling processes between atmosphere and ocean in the South Atlantic, and how these processes affect the climate over Brazil and South America in general. Conceived by the professors of the Department of Agricultural Engineering and Environment André Belém and Márcio Cataldi, the project was submitted to a public call by the Ministry of Science, Technology, Innovations, and Communications (MCTIC) to be applied at the H-38 NHo Cruzeiro do Sul. However, it was not possible to use Cruzeiro do Sul, and MCTIC invited the team to carry out the study on another ship, Vital de Oliveira. 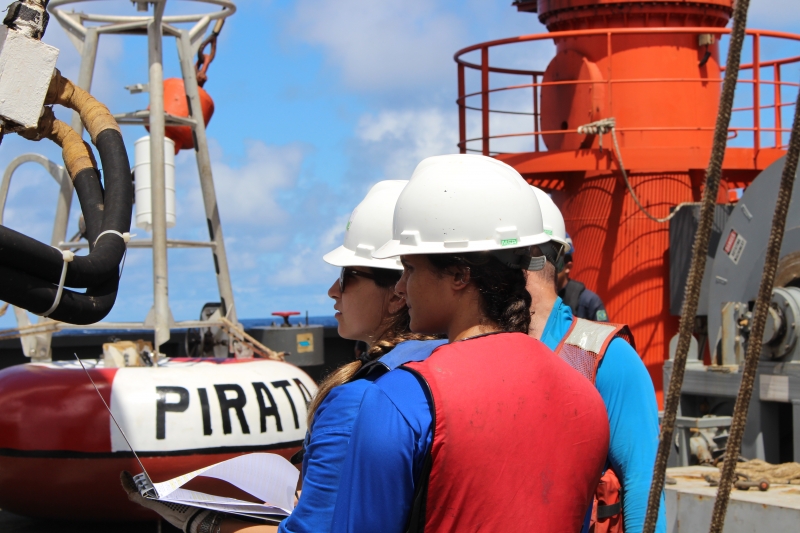 The purpose of DiMAS is to study the dynamics of the coupling between the atmosphere and the ocean in the South Atlantic currents. For this reason, the systems embedded on Vital de Oliveira — the initiative’s operational platform — are used to collect temperature, salinity, and ocean currents samples. “As main activities, we have the collection and processing of CTD data (equipment to measure temperature, salinity, oxygen dissolved in water, and fluorescence), in addition to measuring currents up to 5000m deep in some stations,” says Professor André. The information is collected for the international PIRATA (Prediction and Research Moored Array in the Tropical Atlantic) program, an in situ observation network composed of buoys that monitor a series of variables of the ocean-atmosphere interaction processes in the Tropical Atlantic.

The activities related to the project are carried out at UFF’s Oceanographic Observatory, located at the School of Engineering in Niterói. In the laboratory, the dissemination of accurate information about the oceans, the planet’s climate and the different interactions between its physical and biological components structure the linked lines of research. Graphs of temperature and salinity for comparison with satellite data are also produced by the team, in addition to the collection of elements on atmospheric and meteorological phenomena during the expeditions. Water samples are then analyzed for their isotopic content, a kind of geochemical “signature”, which indicates which processes influenced the formation of the specific water mass from which the material was taken.

The methodology used influenced the publication of an article (available in English) based on samples collected in campaigns with Marinha do Brasil, identifying processes of ocean-atmosphere dynamics in the Western South Atlantic region. Stable isotopes (elements that do not deteriorate with others, since their particular combinations of protons and neutrons are stable) have been widely used both to discuss current ocean circulation processes and to reconstruct how ocean currents have affected the climate in the past. “What we have found so far is that the water bodies have a marked seasonal characteristic that correlates with climatic events connected to the South American monsoon, which is the main climatic event responsible for bringing moisture over Brazil,” highlights researcher André Belém.

Vital de Oliveira, the main research platform of Marinha do Brasil is, today, the ship responsible for the maintenance, exchange, and installation of the PIRATA program buoys in the country. Its name is a tribute to the Recife-born frigate captain Manuel Antônio Vital de Oliveira (1829-1867), patron of hydrography due to his important surveys of the Brazilian coast between the São Francisco and Mossoró rivers, which helped in the making of a series of nautical charts.

Its crew is composed of approximately 90 sailors and 40 undergraduate and graduate researchers on natural resources and marine biodiversity. Matheus Paiva, student of the Graduate Program in Ocean and Earth Dynamics and a member of DiMAS, justifies that this opportunity brings great personal learning expectations, in addition to academic and professional partnerships: the master’s student is responsible for supervising the quality of the collected hydroceanographic data and coordinate the activities of 3 other researchers also associated with DiMAS. “This honor motivates and inspires me, and it is with this feeling that I embark willingly to proudly represent UFF and Oceanographic Observatory in the most remote areas of the South Atlantic and in the annals of Brazilian and international science,” he underlines.

The campaign lasts 2 to 3 months, but the processing, analysis, and publication of the results go beyond the other months of the year. In addition to data analysis, there is also a period focused on the scientific publication of results. “This cycle is important, as it is based on publications that the numerical forecasting models are modified, improving our ability to forecast weather and climate,” highlights Yaci Gallo, also a coordinator of DiMAS and a doctoral student at the Graduate Program in Ocean and Earth Dynamics. In the weeks preceding the trip, there is a preparation logistics, training of on-board personnel, tests with new software, and updating of the measurement protocols. 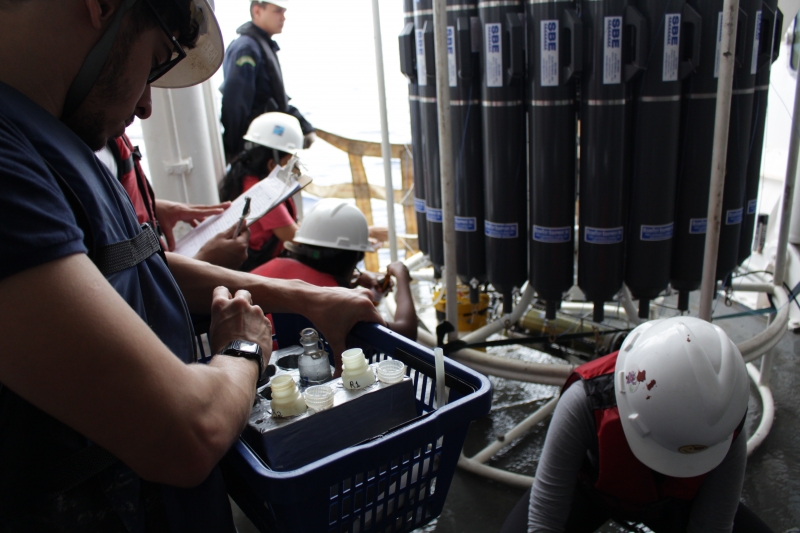 Most of the data analysis is done on the computers at UFF’s Oceanographic Observatory, but calibrations and measurements with samples are usually performed at other institutions. The calibration of the salinity data, for example, was carried out by the team on the premises of the Instituto de Estudos do Mar Almirante Paulo Moreira, in Arraial do Cabo. Isotopic analysis, however, is being carried out at the Universidade Federal da Bahia. In 2020, DiMAS will be represented by Yaci at the Helmholtz Centre for Ocean Research in Kiel, Germany, for academic and technical exchange, developing new techniques that will be used in the project. “We have a large team of collaborators from both UFF and Universidade do Estado do Rio de Janeiro and even the Peruvian navy. One of our master students, Milagros Aliaga, is a lieutenant of the main Peruvian defense force, carrying out his work with the Oceanographic Observatory,” emphasizes André.

“The DiMAS project seeks to remain in constant evolution, whether using the best practices carried out by the world scientific community, or by strengthening ties with other institutions and social sectors. In this way, the general understanding of the oceanic and climatic processes of the South Atlantic that governs Brazilian environmental conditions is expanded, and this, in turn, enhances social, strategic, and economic gains at the national level,” reaffirms Matheus Paiva. In addition, knowing and monitoring the Amazônia Azul is essential for its sustainable development and protection. The dissemination of correct and quality information is an essential strategy for the conservation of marine resources in Brazil and the world.